Recently, BBC North West’s Inside Out programme conducted an investigation into the 1993 Warrington bombing. Ending the police’s embarrassment of not catching the killers of Johnathan Ball and Tim Parry was, seemingly, the motivation. Inside Out speculates that the perpetrators of the lethal bombing were Jan Taylor and, Red Action member, Patrick Hayes. Inside Out asks that when the police were looking for Irish suspects; should they have been looking for a rogue IRA active service unit made up of Englishmen.

Another problem with the same targets, same nationality of suspects theory is that Hayes and Taylor were also convicted of bombing a train. Where does the train attack fit in to Inside Out’s story?

Red Action is painted as a shadowy organisation. Whilst certainly secretive it was hardly unreachable. The Independent, ITV and the BBC had all interviewed Red Action. The organisation was very openly pro-IRA, it was on the front of its newspaper and on its stickers; it wasn’t a secret. It was not the underground network Inside Out would have us believe. 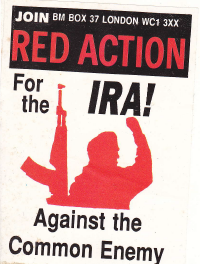 Another claim is that the (or these?) English IRA active service unit were rogue or not in the loop. It is pointed to that the IRA was already at the peace table so why would they need to continue bombing? Furthermore, the polices’ claim that the IRA didn’t use the correct code words is their evidence of the bombers being rogue. But the IRA disputed that the wrong codes were used at the time. It’s a ‘he said; she said’ situation in which the truth may never be known.

Inside Out’s own evidence can be used to dispute the rogue unit idea. To provide evidence that there was a campaign to bomb certain targets in England they discuss how the IRA’s top man in England was caught with a list of targets, including gas works, and semtex. If the orders were coming from the IRA’s leading volunteer in England how were the active service units rogue or acting alone?

The evidence presented implying the guilt of Patrick Hayes and Jan Taylor is hardly clear cut. The idea that English IRA units were bombing the same targets isn’t true and the idea they were rogue has little evidence. I believe the documentary provides more questions than answers. The simplest being what was the purpose of documentary? And why now?

The Arrest of Patrick Hayes

Charge of the New Red Brigade, The Independent. This article asks who Red Action are following Hayes’ arrest.

Syd Shelton tells why it was important to engage with the white working class community to prevent a further rise in support for the far right.

He also discusses the photography and how Temporary Hoarding moved away from Cartier Bresson-esque photography which dominated the left and used staged photographs.

He recollects his experiences at the Battle of Lewisham: the riot shields, a group of girls capturing a Union Jack from the NF honour guard and how this day helped form the ideas which would lead to Rock Against Racism.

Finally, he discusses the setting up of the first Rock Against Racism Carnival and the, sometimes taut, relationship with the Socialist Workers’ Party.

Give it a watch!

This Searchlight video taken during a Republican internment commemoration march in London. This was one of the first times C18 had publicly taken to the streets and this footage was used several times by the media.

Thanks DH for putting me onto this.

World In Action goes inside the National Front and the BNP to reveal the violence and deception behind it’s patriotic public face. The film includes sworn statements from a police infiltrator and from defectors – some in hiding – and reveals the contents of confidential files and private documents.

Combat 18 (1 = A(dolf) 8 = H(itler) ) was an organisation set up to combat Anti-Fascist Action. It achieved some notoriety in the media and was blamed for the 1995 Lansdowne football riot in Dublin.
Here are some videos:

This report was done shortly after the Lansdowne riot and features Manchester AFA.

World in Action did no less than three reports on C18:

These videos are thanks to the fantastic work of 45antifascist

In September 1992 AFA achieved its greatest “set-piece” victory  against Blood and Honour. The fight raged around Waterloo Station in London and was dubbed the Battle of Waterloo.

Here are some videos.

These videos are thanks to the fantastic work of 45antifascist

In 1992 Anti-Fascist Action produced an Open Spaces documentary for the BBC. Here it is in full:

Those that brought you Beating the Fascists have produced an overdue yet very good video. It contains lots of pictures and videos of anti-fascist actions.